Massive 9.0
Massive 9.0 is now available. There are many new features including the new Shader page for creating shader networks, the Lane Generator for placing Agents and Lanes at the same time, multi-node connect, USD support and much more.

Massive now supports creating, importing, and editing of shader networks for Arnold, RenderMan and V-Ray. Unlike most other VFX software, shader networks can be used in multiple materials, so that a change to the shader network will instantly affect all of the materials that use it. And it even works with existing agents. Massive automatically builds shader networks for pre 9.0 agents on loading the agents, to reproduce the results of earlier versions of Massive. So there's no need to start from scratch with the shading for existing agents. Materials can be imported from Arnold ass files, RenderMan ribs files and V-Ray vrscene files, making it simple to import materials from Maya, Houdini, 3DS Max and other 3D applications.


USD is rapidly becoming an industry standard and now Massive can generate USD files as Sim output. These files can contain full shading networks for supported renderers or USD preview shaders. All geometry and animation is exported failthfully ready to be imported into Maya, Houdini, Katana or any other application that has sufficient USD support.


The Lane Generator is a new addition to Massive's placement tools. It alows for adding Lanes that already have Agents placed on them, providing siginificant improvements to the scene layout work flow.

Lane Generators also have X and Z ranges for the locators, so that Agents can be placed in specific areas of a Lane, such as only on the left, or only at one end of the Lane.

Multiple Lane Generators can be placed on a single existing Lane to allow for such scenarios as Agents on one side of a Lane facing in the opposite direction from the Agents on the other side. 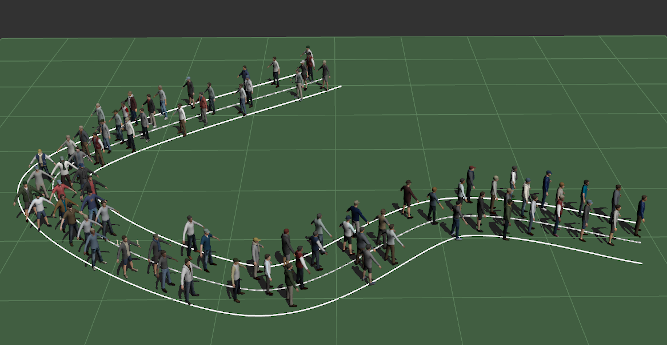 
Multi-node connect can speed up brain editing by allowing for connecting one to many, many to one, or many to many with just a couple of mouse drags. To connect one node to many, ctrl-click on the 'from' node and then ctrl-box-select the 'to' nodes.


Previously the scene page in Massive contained nodes for lights, cameras, terrain, agents, and groups. Now there are also nodes for placement generators, flow field splines, and lanes. This allows for much more convenient editing of scene layout, and greatly simplifies handling of complex scenes. 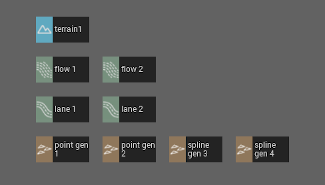 
For complex motion trees there might be several steps for an agent to get to distant actions in the motion tree. Previously this case required a trail of "breadcrumb" triggers to lead agents around the motion tree. Motion tree path planning makes it unnecessary to use breadcrumb triggers. Instead, Massive finds the shortest path through the motion tree to get to actions that the agent is trying to run.


Agent geometry can now be exported in a simulation as Alembic or Wavefront OBJ files. This allows for much easier integration with other software for such things as applying particle effects, fluid simulations etc.


Many Massive Artists are now working remotely, and sometimes the visibility of remotely operated software is not as good as it is when operating it locally. So there is now a high contrast GUI mode for Massive that makes it easier to read text and small interface items when working remotely.


Long names in brain and body nodes can be difficult to read, since usually only part of the name is visible on the node itself. In Massive 9.0, hovering over a node will expand the node to display the full name.


To avoid accidentally moving a camera, there is now a 'lock' button. The lock button prevents any changes to a camera. It is switched on automatically for cameras that are imported from Maya ascii or FBX files.


It is now possible to begin writing out files from a simulation at a specified frame, after the start frame. This allows for pre-roll from the 'start' frame without generating any output until the 'output' frame is reached. For long pre-rolls of large simulations this can save a lot of time and disk space.