Creatures from the deep: how Massive had a hand in Aquaman's Trench monsters


In Aquaman, the latest installment of the DC Extended Universe films, lead characters Mira (Amber Heard) and Arthur (Jason Momoa) venture into the depths of the ocean by boat to the Kingdom of The Trench.

Before their arrival, however, they are greeted by a flurry of gruesome creatures, known as The Trench. Large crowds of The Trench approach Mira and Arthur's boat within the rolling waves before boarding.

The hordes of Trench in the sequence - of which there are about 1500 in the water at any given time - came to life care of Massive simulations by Scanline VFX, which was able to tie in the creatures' movements directly with digital water simulations. Here's how they pulled it off. 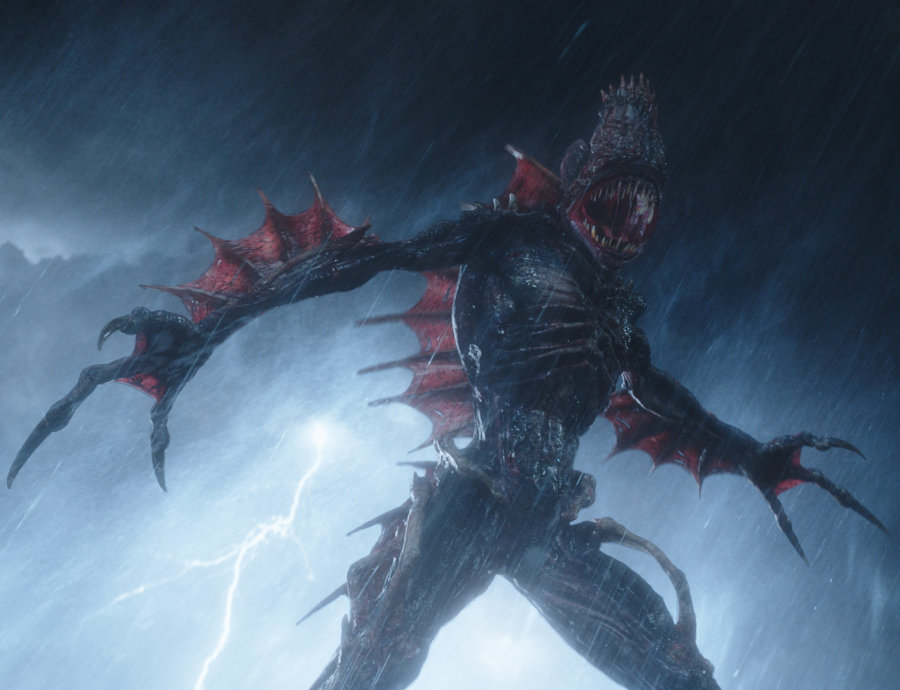 
As The Trench approach the boat, they needed to do so at different depths below the waves. They also needed sometimes to breach the water, dive back under, and jostle for position as they got closer to their target. This behaviour was one reason why Scanline VFX chose Massive for the task.

"What we wanted to happen was have interactivity between the trench creatures arguing and fighting about their positions, so that it was not just a swarm of Trench following some path," outlines Scanline digital fx supervisor Julius Lechner. "There were individual behaviours required from each of the trench creatures, and we thought Massive would be the best way to go with that."

© 2019 Photo Courtesy of Warner Bros. Pictures. All Rights Reserved
Roughly 1500 creatures were in the water at any moment in the sequence. If a Trench managed to get up on the boat and start charging at Mira or Arthur, then that was achieved as keyframe animation. However this only related to a few creatures, and most of The Trench in the sequence remained water-bound.

Trench in the water


Scanline began the process with a dummy Massive agent for initial testing. Not only did the creatures need to exhibit specific swimming, diving and jostling behaviors, they also needed to interact with a rolling set of ocean waves convincingly.

"So our first challenge we had to solve was to have the creatures be driven by the ocean," notes Lechner. "We created a very simple sim with the basic motion of our ocean. It was a low-res representation of the waves brought into Massive including the velocities to drive the Massive agents."

"Once we had that, we added multi-layered waves of Trench. Some were swimming on the surface; some were in different levels below, so you got some depth to it. When the lightning was flashing, you would then see further into the water and see them deeper and deeper in the water."

"The brain set up in Massive involved controlling different depth levels," adds Scanline crowd artist Nick Levenduski. "There were parts where they'd get closer together, and that would make them do different actions." 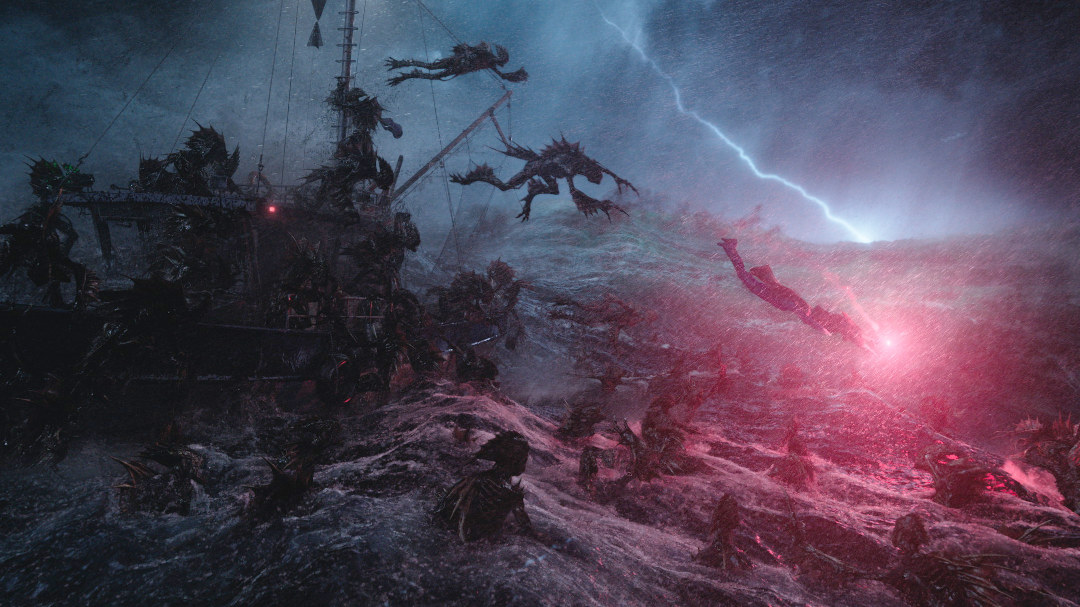 © 2019 Photo Courtesy of Warner Bros. Pictures. All Rights Reserved
Indeed, The Trench behavior changed throughout the course of the shots. They could be on the surface, go deeper, or come out of the surface of the water. Lechner said when Trench agents arrived at the boat itself, they were made to be more active and aggressive. "So we"d have them come to the boat, aggressively dive under water, and push themselves around a little bit to fight for the best position," describes Lechner.

Scanline artists then brought the scene back into Flowline, the studio"s proprietary water simulation toolset, where they could deal with all the interaction with the crowd Trench via full fluid sims.

Each member of the Trench, also, had large fins. With so many in the water, Scanline was not inclined to have to run each crowd creature through CFX. "So," explains Lechner, "we made a dynamic system so the fins would match the Trench's movements, done directly in Massive."


Scanline is well-known for its highly photorealistic water simulation solutions; here was an opportunity to combine its prowess, too, in creature work. The studio was able to use a tried and tested workflow of 3ds Max and V-Ray, coupled with a custom Massive loader, to achieve the Trench crowd shots. The development and crowd team itself was led by Nick Levenduski and Jordan Alaeddine.

Lechner, who oversaw the work, says the research and set-up period lasted a few weeks, and then shots were turned around by Scanline relatively quickly - over a matter of days. "For me it was nice because it was very unproblematic for us. Our development was pretty straightforward, and the end result looks really good."